Posted on September 1, 2012 by Meghan Gerrity 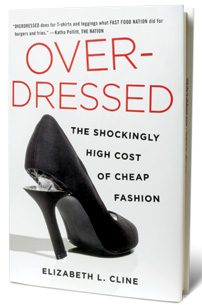 Elizabeth L. Cline’s ‘Overdressed’ really opened my eyes to the truth behind the cheap fashions that line the racks at popular mass retailers nationwide.

Like the author, I too have been more than guilty of buying throw-away shirts and dresses in my 20′s that I would wear for a night out and (either because they fell apart in the wash, or I selfishly didn’t want to be photographed twice in the same thing) never wore them again. At the time, I never even thought twice about how my actions were affecting the environment or workers overseas.

Today, as a vintage clothing store owner, I thought I knew everything there was to know as to why consumers should and do shop vintage vs. new. I like wearing the retro clothes because I feel that doing so is better for the environment and the garments seem to hold up much better than today’s duds. Much to my surprise, I ended up learning so much more about the vintage clothing industry than I ever thought I would from a book focusing on modern fashion.

Cline details the fast fashion process from design, construction, and ultimately disposal of all things trendy. I had no clue how little of the process of US based clothing retailers actually took place on American soil.

I had been shopping and donating to Goodwill and Salvation Army thrift stores since before I could drive, but had no idea that they were so overloaded with clothing that they end up dumping some of the items literally and also send the rest to textile warehouses who in-turn resell the items both domestically and overseas. So, that pair of jeggings that I donated last month and swore someone else locally needed probably ended up overseas.

The book is such a great eye opener and really a great arguement for making the most of what you have, repurposing items in your wardrobe that you don’t currently wear as is, and buying second-hand merchandise. It’s a great read for those who love today’s fashions and those vintage loving fashionistas like myself.

So, even though that $5 flirty cocktail dress from H&M might seem like a steal, the idea of knowing that I’m contributing to less than ideal living conditions for those who worked on the items overseas and most likely adding more to the landfill in the near future makes me think twice and stick to wearing a fab vintage frock that was made in the US back in the 70s and still looks like a million bucks after a go in the washer.

Definitely pick up this book and discover the darker hidden side of today’s beautiful garments.

This entry was posted in Uncategorized. Bookmark the permalink.